You know Zürich Hauptbahnhof, it has this huge empty space in the main building, where they host events like Christmas markets, Oktoberfest and even concerts. But for a few weeks at a time, it is just empty. 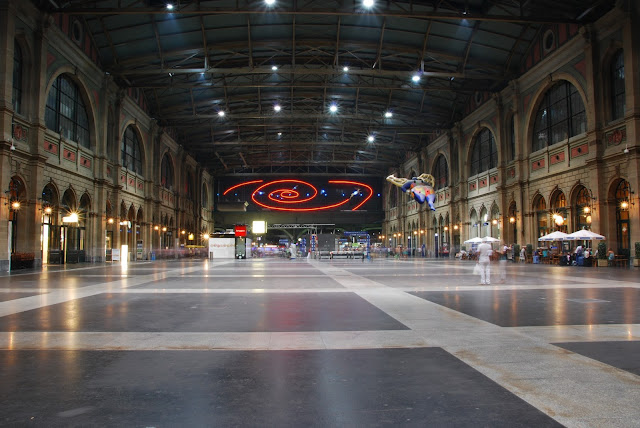 The first time I was there it was kind of evident that this hall used to have tracks where all the trains ran in. I was always wondering how it must have looked like at that time with steam-engine locomotives. So today I did the research.

The earliest picture I found is from 1847. Of course it was simply called 'Zurich bahnhof' (Zurich train station) back then instead of 'Hauptbahnof' (mainstation). 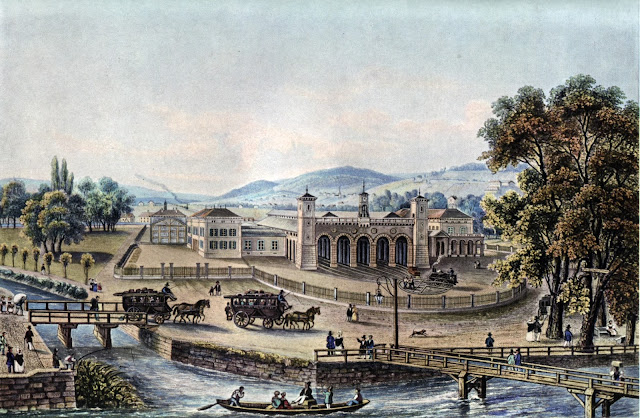 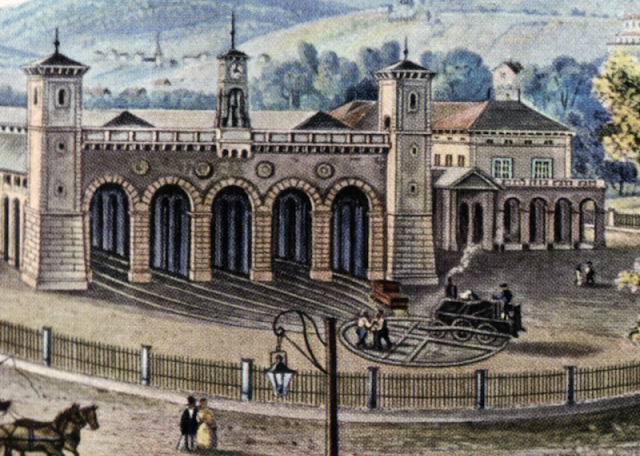 1870 - Construction of the train shed

In 1870, they started rebuilding the main station building, replacing it with a train shed spanned by iron trusses, covering 6 tracks.

This is the building shed from the back, photo taken from the side of Sihl. 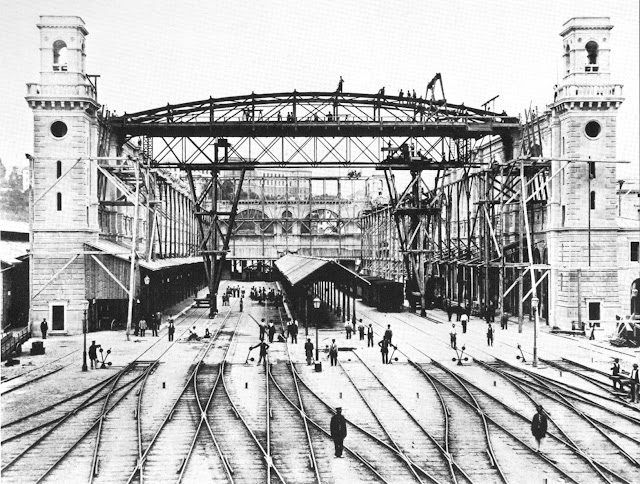 The almost finished main entrance in 1870, where the tram station Bahnhofplazt/HB is today. 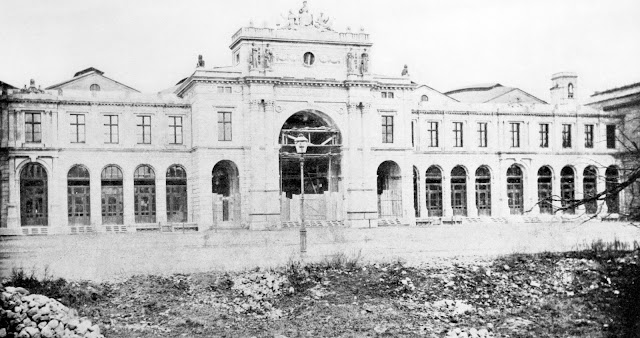 The station was named Zürich Hauptbahnhof in 1893. In 1902 SBB took over the management of the Swiss railway. This was also the year when they took off the tracks in main hall and left it empty for pedestrians.

I found a newspaper article in Grütlianer from 1898, March 22. I think they talk about these plans. Although neither the language, nor the font type is easy to read for me. 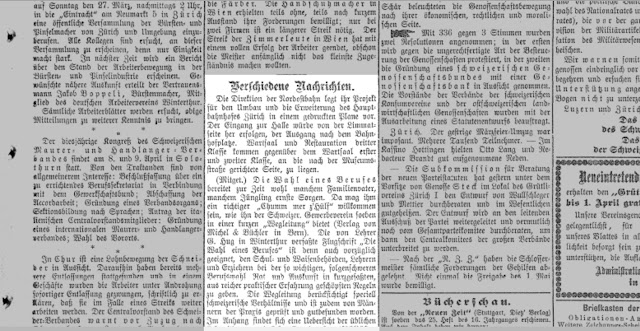 The Directorate of Nordostbahn presents its project for the construction and extension of Zurich main station in a printed plan. The entrance to the Hall would be from the side of Limmat, the exit next to Bahnhofplatz.

The finished station in 1907 already looking impressive and huge. 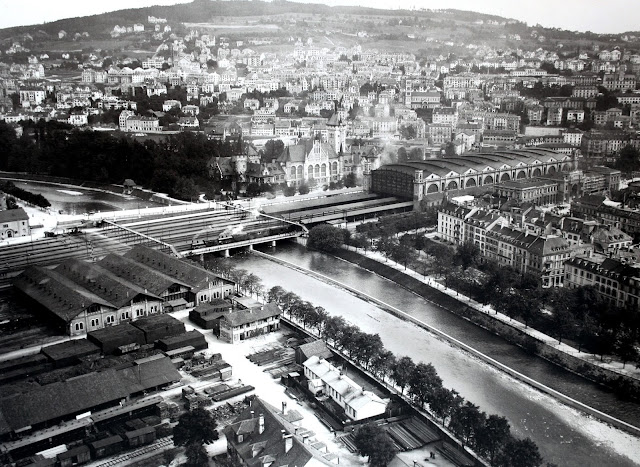 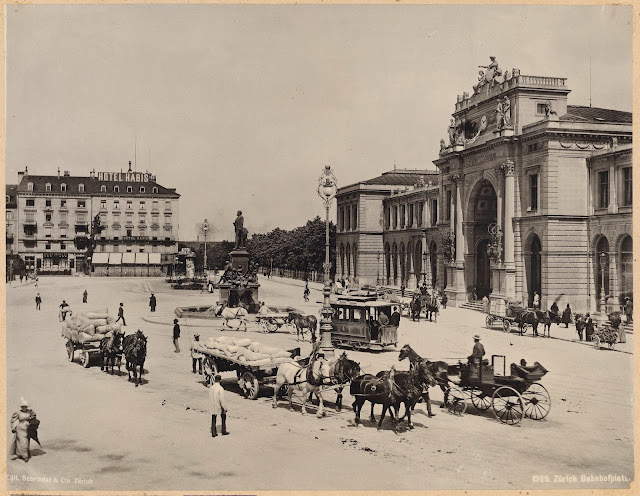 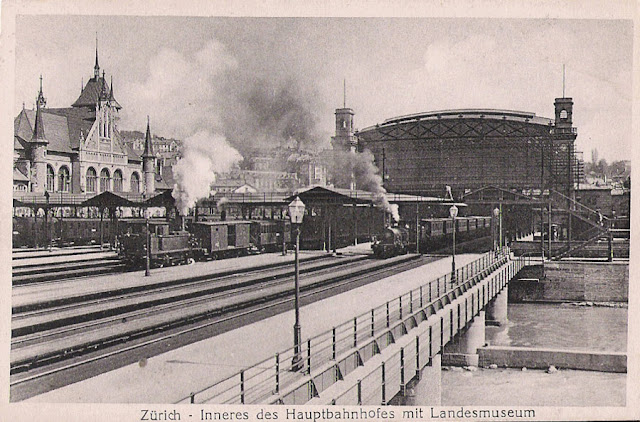 1946 - Even more space for Zürich Hauptbahnhof

Another article from 1946, August 17, Die Tat talks about expanding HB even more. Now that the electrification of the railway network started the traffic is bigger and there is less infrastructure needed for the trains close to the station. 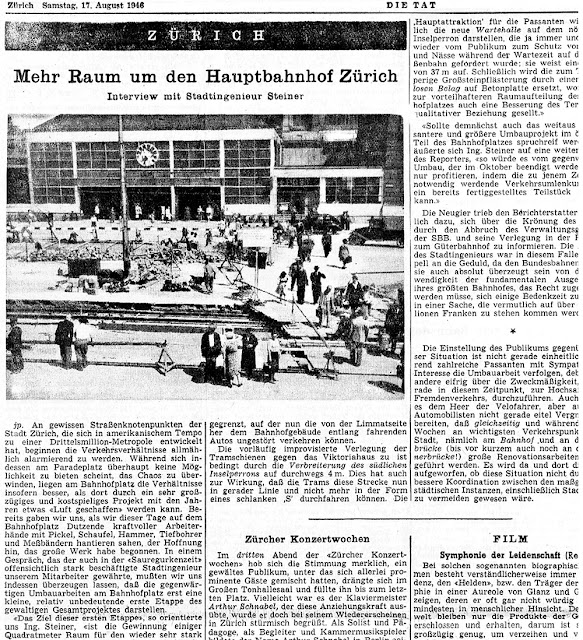 "The goal of this first stage," commented Steiner, "is the acquisition of a few square meters of space for the once again very strong motor traffic, but also for pedestrians, who will no longer be exposed to wind and weather without protection, when they get off the trains, often with parcels and suitcases in the hand, waiting for the tram to take them to the hotel or home. The building of the Federal Railways in the north, the Victoria House in the south, and the Habis Royal Business House in the West, set firm boundaries to our present reconstruction plan and determine the space within which we must move.

What can be done, however, is to make the very bad traffic of Bahnhofplatz station less busy. Once space for parking cars has been gained by abolishing the long pedestrian island in front of the Habis, which had long ago no practical value; The left-over narrow island is still a protection for pedestrians who are striving towards the west, to Löwenstraße, from the direction of the train station.

Nowadays, there are more than 2900 trains running through Zürich HB daily. 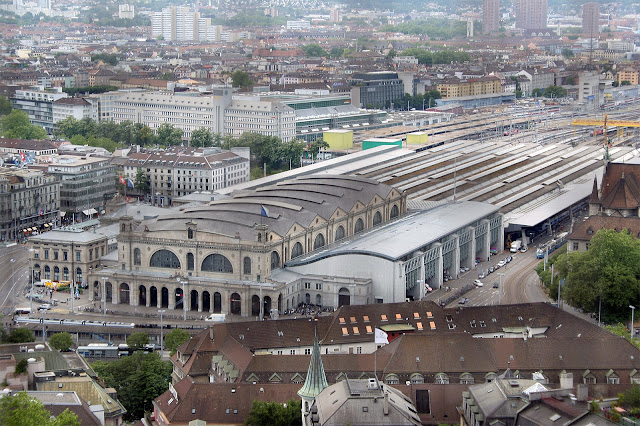