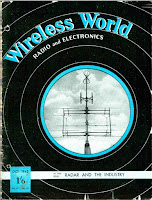 Arthur C. Clarke wrote the following article in 1945 for the magazine called Wireless World. He suggests to shoot up 3 "rocket stations" to Earth orbit that would give the whole world radio coverage.

This was only 3 years after the first rocket ever traveled to space. At that time, rockets were not strong enough to take anything close to Earth orbit. It is almost certain that he was the first person who ever thought about global radio coverage from space. It took an other 12 years before Sputnik 1, the first actual satellite was put in place.

Many may consider the solution proposed in this discussion too farfetched to be taken very seriously. Such an attitude is unreasonable, as everything envisaged here is a logical extension of developments in the last ten years - in particular the prediction of the long-ranged rocket of which V2 was the prototype. While this article was being written, it was announced that the Germans were considering a similar project, which they believed possible within fifty to a hundred years. [...]

It will be possible in a few more years to build radio controller rockets which can be steered into such orbits [stable Earth orbit] beyond the limits of the atmosphere and left to broadcast scientific information back to earth. A little later, manned rockets will be able to make similar flights with sufficient excess power to break the orbit and return to earth.

There are infinite number of possible stable orbits, circular and elliptical, in which a rocket would remain if the initial conditions were correct. [...]

It will be observed that one orbit, with a radius of 42,000 km, has a period of exactly 24 hours. A body in such an orbit, if its plane coincided with that of the earth's equator, would revolve with the earth and would thus be stationary above the same spot on the planet. It would remain fixed in the sky of a whole hemisphere and unlike all other heavenly bodies would neither rise nor set. [...]

A transmission received from any point on the hemisphere could be broadcast to the whole of the visible face of the globe, and thus the requirements of all possible services would be met. [...]

A single station could only provide coverage to half the globe, and for a world service three would be required, though more could be readily utilized. [...] 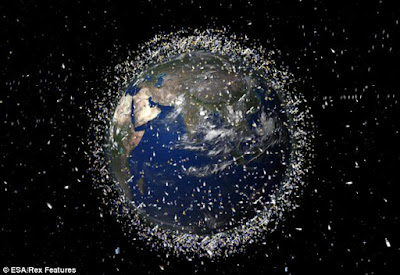 I think it looks scary how much "space junk" we left in space. Here is a computer-generated impression of the thousands of objects in orbit around Earth.


P.s.: Fun fact: Arthur got 50$ for this article. He says that was good at the time. You can hear him say this in this youtube video.