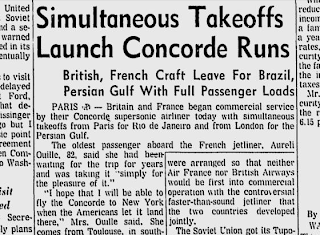 PARIS - Britain and France began commercial service by their Concorde supersonic airliner today with simultaneous takeoffs from Paris for Rio de Janeiro and from London for the Persian Gulf.

The oldest passenger abroad the French jetliner, Aureli Ouille, 82, said she had been waiting for the trip for years and was taking it "simply for the pleasure of it."

"I hope that I will be able to fly the Concorde to New York when the Americans let it land there," Mrs. Ouille said. She comes from Toulouse, in southern France, where the French plane was built.

Both planes had full loads of 100 passengers, but the French did better financially. Ninety-three of their passengers were paying customers; only 28 abroad the British flight paid.

The synchronized takeoffs were arranged so that neither Air France nor British Airways would be first into commercial operation with the controversial faster-than-sound jetliner that the two countries developed jointly.

The Soviet Union got its Tupolev 144 supersonic jetliner into commercial service first on Dec. 26. inaugurating twice-a-week mail and cargo service between Moscow and Alma Ata, 2050 miles away in Soviet Central Asia.

Soviet officials said passenger service on the run would not start until the second half of 1976, and there has been no indication when the Russians might start international service.

France and Britain spent more than a billion dollars to develop the Concorde, but it will be a financial flop unless it can be used on the lucrative North Atlantic run.

Permissions for two flights a day each to New York and Washington has been held up by objections from environmentalists and persons living in the neighborhoods of the U.S. airports, but Transportation Secretary William T. Coleman, Jr., is expected to decide by Feb. 6 whether the service will be allowed. 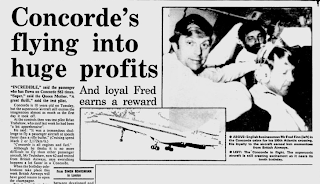 "INCREDIBLE," said the passenger who has flown on Concorde 582 times. "Super," said the Queen Mother. "A great thrill," said the test pilot.

Concorde is 10 years old on Tuesday, but the supersonic aircraft still excites the imagination almost as much as the first day it took off.

At the controls then was test pilot Brian Trubshaw, who said last week he had been "a bit apprehensive". He said: "It was a tremendous challenge to fly a passenger aircraft at speeds faster than a rifle bullet." (Crouising speed Mach 2 or 2,172km/h.)

"Concorde is all engines and fuel."

Although he thinks it is no more difficult to fly than other passenger aircraft, Mr Trubshaw, now 62 and retired from British Airways, says everything happens a lot faster in a Concorde.

When the birthday celebrations take place this week British Airways will have a good reason to open the champagne. But it wasn't so long ago that the Concorde was scorned as an albatross which burnt money while passengers stayed with cheaper, more conventional travel.

In its first year of operational it lost $4.6 million, which had become a $24 million profit nearly a decade later.